Got this diploma recently. Gotta say I’m damn proud of it! 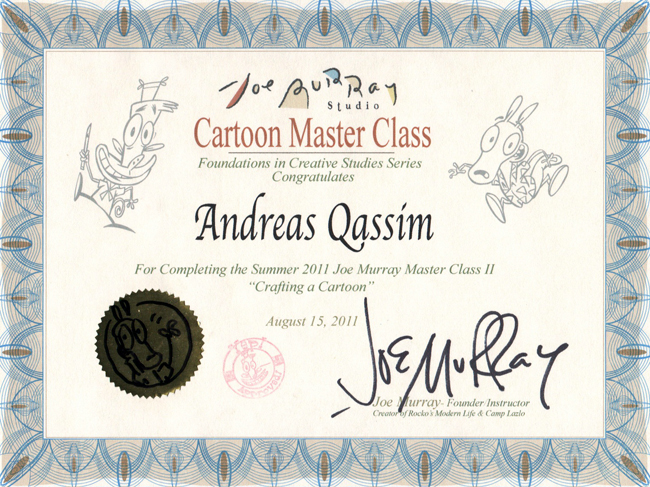 It’s the end result of a chain of events starting with me stumbling upon Joe Murray’s book Creating Animated Cartoons with Character in my local art store. Joe Murray is the creator of the cult series Rocko’s Modern Life (Nickelodeon) and Camp Lazlo (Cartoon network). Coincidence or fate, it was just the book I needed at that moment. It’s about how to develop your own cartoon. I was already a fan of Joe’s drawing style, and I was very inspired by his book. Many how-to books that are supposed to be inspiring leave you rather discouraged. “I’ll never be able to do that”. This book however painted nothing but pictures of possibilities.

I looked up Joe Murray on the internet and found that he gave online courses on the same subject, as a kind of continuation of the book. Freelance commissions were on an all time low the summer of 2011, so I signed up.

During the course I learned to have fun again with drawing. It started with simple doodling, something I had almost stopped doing. From there we went into developing characters, creating a “hook”, building a world around the characters, writing stories, and finally storyboarding a cartoon. Each week of the course I had a Skype session with Joe discussing the work. Here’s a sample of what I did: 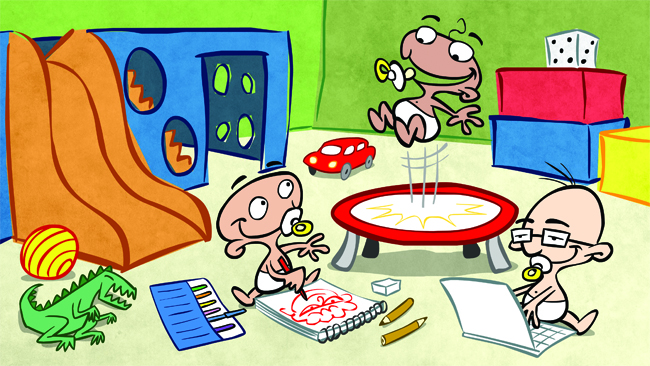 I’m currently developing this project, so I can’t tell you much more at the moment. Hopefully it’ll turn into something someday.

If you’re like me and spent most of your professional cartooning years illustrating other people’s stuff, while all you really wanted was doing your thing, but for one reason or another you never got around to doing it, I can highly recommend Joe’s book and his courses. Joe’s such a nice and inspiring guy! I’m not sure if he does the courses anymore, but the book is still there. 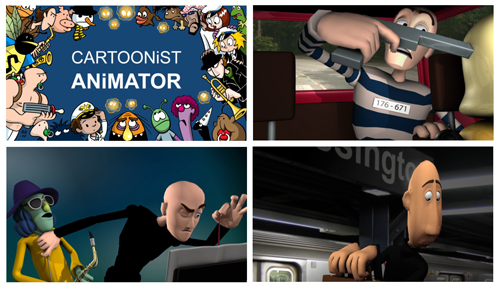 After many hours of editing and re-editing, the reel is done!

Many thanks to all the amazing people who gave me feedback and helped make it better! Now the re(a)l work starts. The job hunt has begun…

My 3D showreel is almost there. This is the final clip to be refurbished. It came from a two week dialogue course with veteran Pixar animator Rich Quade. Rich was Directing Animator on Toy Story, and he animated on Toy Story 3, which will be out any day now in Sweden (can’t wait!). The voice of the clip belongs to Vincent Gallo from the movie Buffalo 66. The refurbished version includes polishing of the facial expressions, adding surfaces and lights to the scene, and further developing the escaped convict’s dialogue partner…

Here’s another freshened up clip for the reel. The result of a 2 week silent acting course with Disney/Dreamworks animator Eric Schmidt.

Going to Work from Andreas Qassim on Vimeo.

The assignment was A) to invent a character and a simple story. I came up with this musician, a triangle player, going to work. B) to have a safe suddenly drop from above (“magic if”). How would the character react in this given circumstance? The lesson to be learned here was that you really have to know your character (how old is he, where does he live, what is he doing, why is he doing it, what does he like, what does he hate etc.) in order to know how to animate him.

Here’s two more shots for the reel. That means I’ve reached the upload limit on Vimeo this week. Sweet! I’ll post here continuously the coming weeks as the reel progresses. There’s is some cool stuff coming up. Welcome back to check it out!