Sometimes I get to draw other things than cartoon characters. Like this poster for Hällevik Tradjazzfestival. 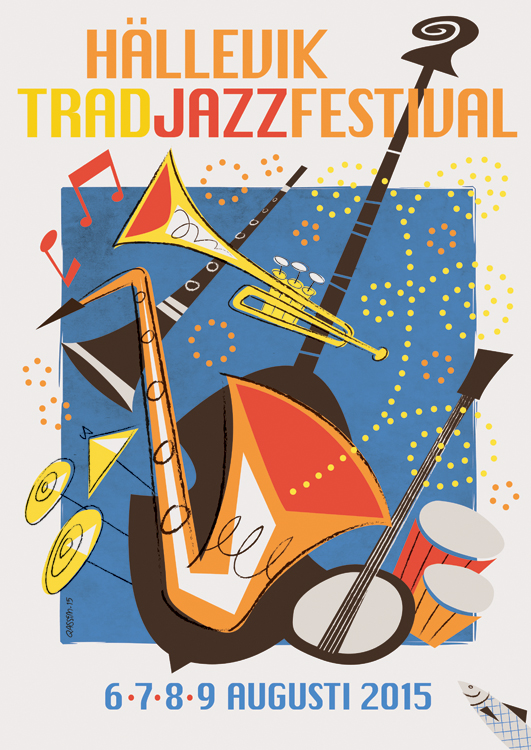 Why don’t you join the other jazz cats in beautiful Hällevik 6-9 August and have yourself a jolly good time? Cheers!

16-18 May it was once again time for the quadrennial Lundakarnevalen (The Lund Carnival). I was part of the 2002 carnival and the 2006 one. This time, with quite a few years of distance from student life, I entered the official poster competition. Mine was one of five entries that reached the final. I didn’t win. However I enjoyed doing this competition. I found a style and a way of working that I liked. The theme of the carnival was “futural” (futuristic, kind of…). I wanted to make something that reflected Lund’s peculiar mix of conservatism and progressivity. I started out with lots and lots of doodles and ended up with this final sketch, done in Photoshop: 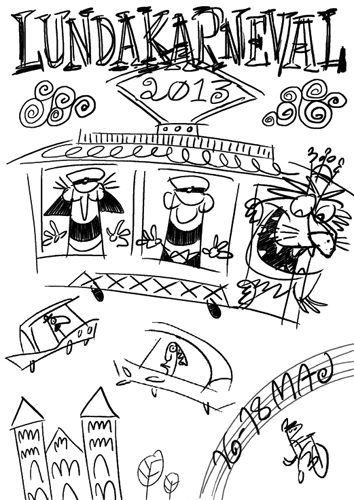 I always loved Back to the Future, the scruffy Delorean being able to travel in time and fly and what not. Thus I chose a “retro” cartooning style (50s-ish) with a futuristic subject matter (a flying old fashioned tram). The vector art was done in Illustrator. A lot of thought went into this: two students one of each sex, the Lund University lion, the logo resembling electricity fueling the tram, the cathedral, the flying retro cartoon cars, the transsexual cyclist, the pride rainbow, the computer motherboard texture in the background etc. I wanted it all in there and ended up with something quite messy: 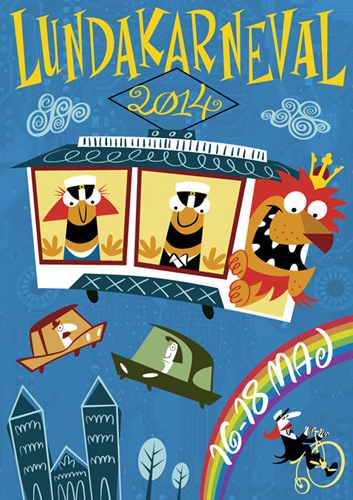 It got me into the final at least! The committee’s critique was basically “try to remove some stuff and find a better font”. Their critique was entirely justified. So I spent a day or two removing stuff and looking for easier to apply, non-homemade fonts. My good ol’ friend Alfred Beckman helped me a lot during this process. Thanks Alfred! Your generous input always improves my work! I ended up with not one reworked entry, but four: 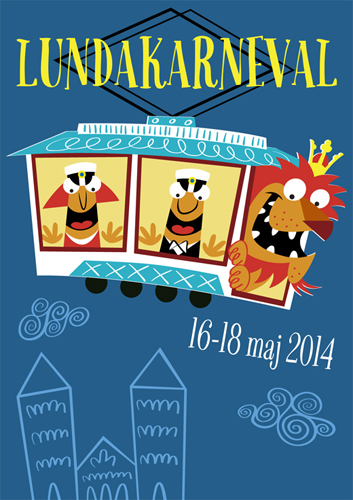 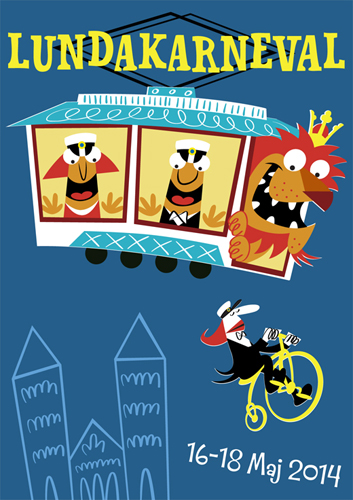 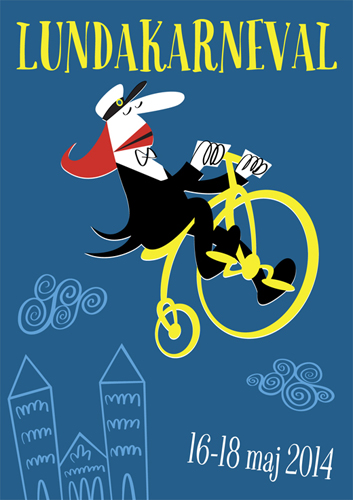 The committee really liked the transsexual student on the old-fashioned bike, so I made one version with him/her as the main graphic object rather than the tram. Maybe it’s the best one? I like the simplicity, but I think however that this one is my favorite:

I put this one in my online portfolio before the carnival, thus I changed the name, so there would be no confusion with multiple carnival posters circulating the net. Which one of these is your favorite?

This spring’s main thematic concert for Bobbe Big Band is a blues and gospel concert fronted by guest saxophone soloist Fredrik Kronkvist and our faithful solo singer Ulrika Orre. Blues and gospel are closely related genres, like two sides of the same coin, so it’ll be interesting exploring the two back to back. 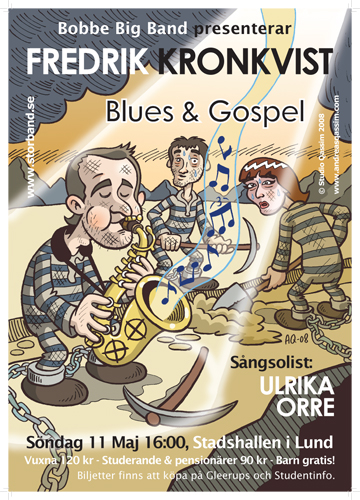 This time we’ve rented the city hall of Lund to try to get away of people thinking we’re a “student band”, wich we’re not, actually. I made this poster to try to sell as many tickets as possible (and we really need to, to be able to pay the rent of the hall). Unfortunately I was too crap at the Adobe CS programs to make it really high resolution. It looks better on screen than in print, but there you go. I’ll try to do better next time.

I want to wish each and everyone of you out there a warm welcome to this very special concert at May 11, 1600 hours. I will hardly be able to play myself since I’ll be busy studying the golden tones of Fredrik Kronkvist’s amazing solo playing…

Check out http://www.fredrikkronkvist.com/movie_NEW3.html if you want to know more about this excellent musician.

Here’s my latest venture: a poster for a big band christmas concert. As if by coincidence, I happen to play in the band. I’d like to invite everyone in the neighborhood and elsewhere to this event! It will take place in Lund, at LTH:s Kårhus (Gasquesalen i källaren) 25/11 at 4 pm. Welcome!

The bloke posing as a dissatisfied Rudolph the Red-nosed reindeer is Bobbe himself (Robin Petersson), the leader of the band. The guys in the sleigh are Ulrika Orre and Per Svensson, the vocal soloists. The ink drawing: 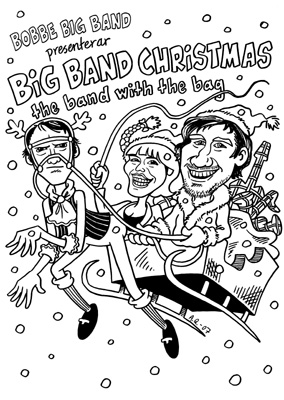 And this is the colored version. The only thing missing is the informational text at the bottom (where, when & how). It will be added by Rudolf… eh, I mean Bobbe. 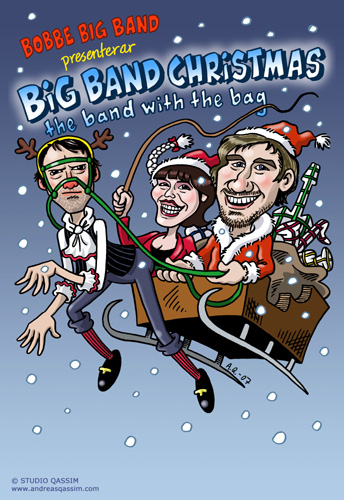 I’m not completely satisfied with the colors (in particular the tacky airbrush effects), but I’m a bit short on time, and besides I’m doing it for free…