13-15 November last year I attended a puppet festival in Denmark called Festival of Wonder. I hadn’t booked anything in advance so I crossed my fingers and just went (4 hours on the train from Lund). On the night of my arrival, I missed the performance I most wanted to see (the last one of friday’s program) by half an hour, and I found out that the youth hostel’s reception had closed early in the afternoon. So there I was in the middle of nowhere (a.k.a. Silkeborg) without any tickets to the weekend performances and with nowhere to sleep.

I called Hotel Dania, situated in the main square of Silkeborg. The hotel guy said EVERYTHING was booked because of the festival, but he had one recently canceled double room to offer. It was ridiculously expensive, but since the alternative was to sleep at the train station and catch the first train back in the morning, I decided to go for it. I explained my situation and looked at the guy with sad dog eyes until he gave me a 50% discount. It was still a bit more than I had in mind, but during the circumstances it was the best I could do, and the price even included hotel breakfast. Happiness!

The rest of the weekend was just like that. Everywhere I went I was told it was full, sold out, that I was too late or whatever, but somehow I managed to get in. Several of the performances I even attended for free. The second night I got the last room at the hostel. Four beds just for me! When I got back to the hostel after a hard day’s puppetry performances the other guests had dinner. You had to pre-book it. I didn’t know and thus missed it. Dog eyes or not, the angels working at Silkeborg Youth Hostel must have felt sorry for me, since they GAVE ME FREE DINNER. That was probably my happiest moment that weekend. I almost cried.

Here’s a small sample of the weekend of wonder:

Wood puppets were probably the most common form of puppet at the festival. 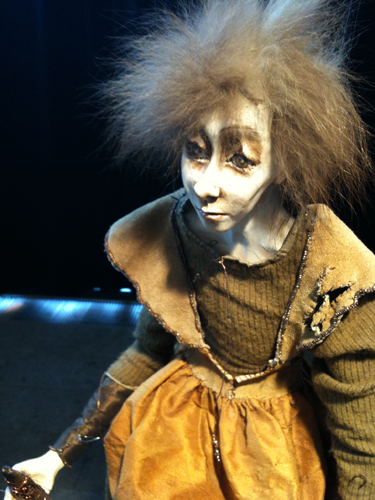 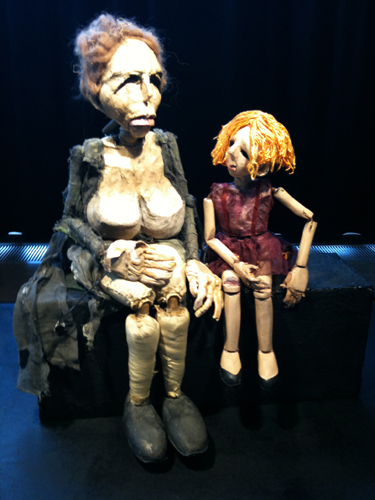 Arent’ these just beautiful? From the exhibition Do angels always have wings?

A painted ad for the Silkeborg art museum. With that car in front it makes quite an art installation in itself. 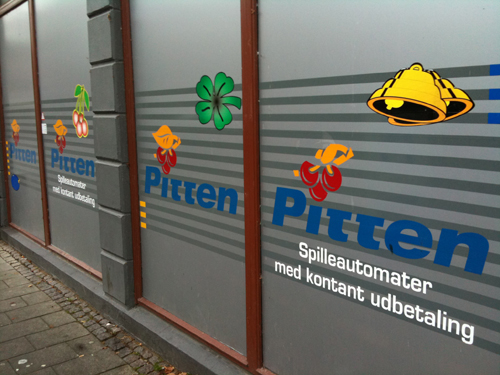 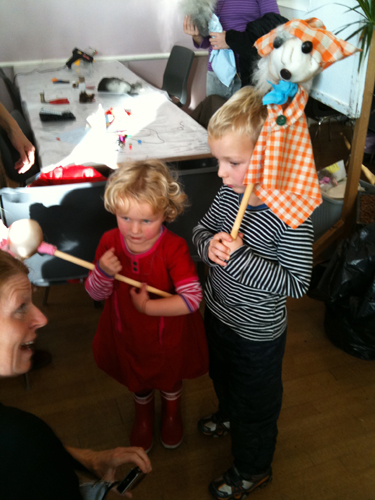 The kids had a daily puppet workshop going on through the festival. I sneeked in and pretended to be a kid. 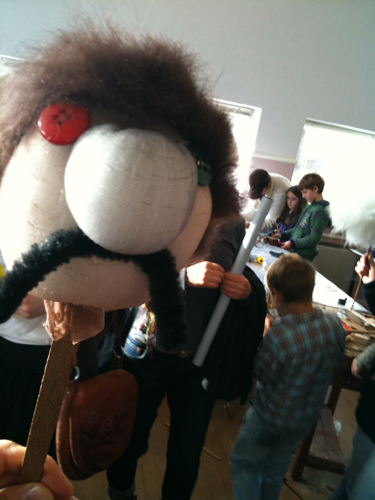 This was my puppet. Let’s call him Bengt. 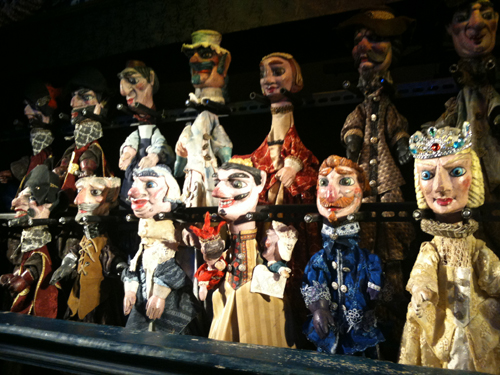 Classic Punch and Judy style puppets from the hilarious Czech performance of The Three Musketeers. 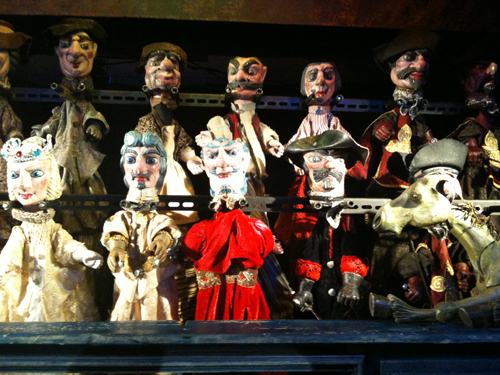 Puppets don’t necessarily have to look like muppets, marionettes or rod puppets. This wooden horse was a giant puppet. You could manipulate it by pulling its reins or pushing handles with your legs. The Obludarium puppeteer is showing the little girl how it’s done.

Obludarium based their acts on Vaudeville and freak show mythology. These included legendary characters like the bearded lady, the world’s strongest man and so on, but always with a fresh twist. I got the T-shirt with the hairy leg. Joy! 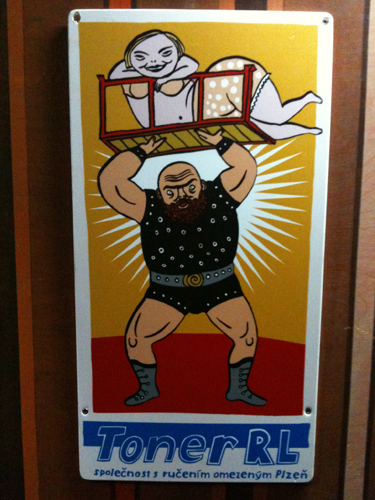 The new circus Obludarium was definately the highlight of the festival. Completely magic and unlike anything I’ve seen before. If the Forman Bros (the sons of legendary film director Milos Forman) should ever stop by your town, I’d warmly recommend you go see their show.

The wilder numbers were hard to photograph since they took place mostly in darkness. Here’s a clip that turned out all right. These big headed clowns, according to the Forman Bros, live in the mountains of the Czech Republic under the trees.

Here’s the video!. It was shot from the back of the auditorium with a simple digital camera, so don’t expect any high defintion extreme close ups. It’s still a little bit out of synch – I tried my best – but it’ll do for now. Unfortunately for my English blog-readers the sketch is in Swedish, but it’s just a bunch of lousy jokes on the word “snow” anyway, so you can probably follow. Enjoy!

14 Dec 2008 I made one of my rare puppet performances at Bobbe Big Band’s christmas concert. It was a sketch featuring Carl-Johan Lennartsson, one of the song soloists, and a snowman. 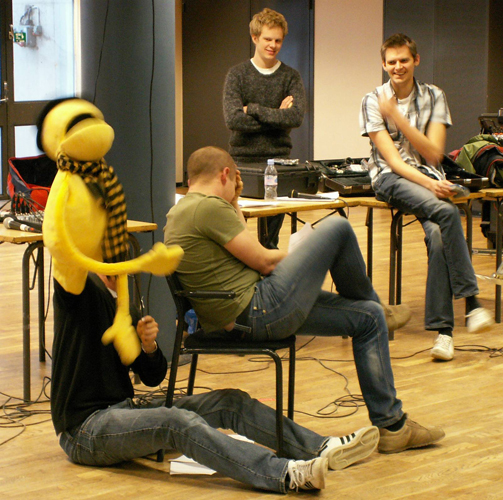 Photo by Martin Nilsson. I created the puppet by transforming one of my music video puppets. Thus it started out yellow… 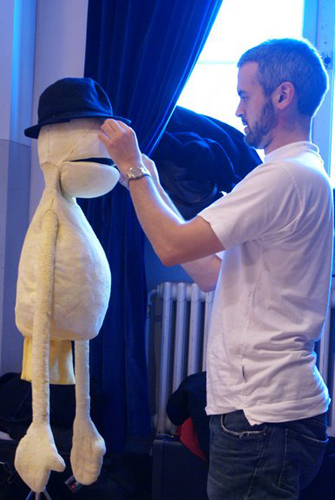 Photo by Tobias Lennartsson. Gradually the puppet took on the appearance of a snowman. The trickiest part was to dye it white. I emptied three cans of white (one can of spray paint and two cans of textile paint), and still a light tone of pee yellow remained… 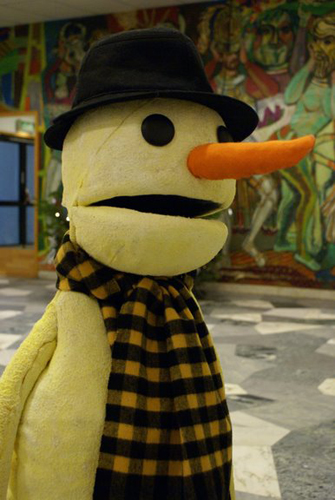 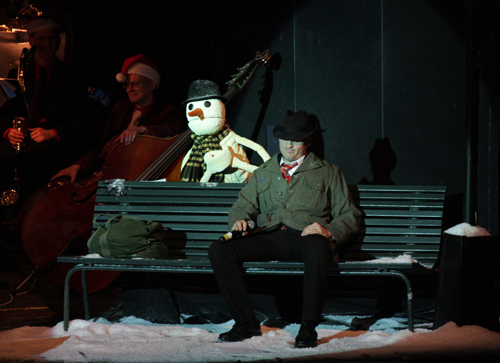 Photo by Christian Berling. During the performance Christian’s excellent lightning whitened the snowman even further. 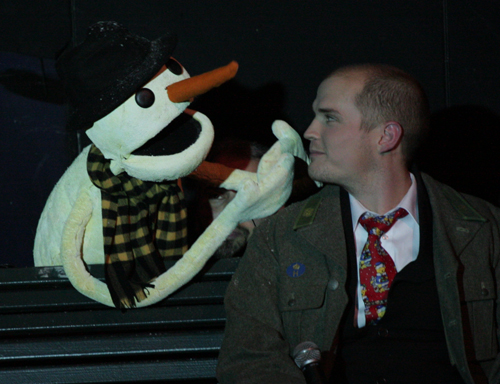 Photo by Christian Berling. The story behind the sketch was Carl-Johan Lennartsson playing the role as a soldier on his way back from doing service far away from home (His first number was “I’ll be home for christmas”). While waiting for public transportation of some kind in the middle of nowhere he’s overwhelmed with homesickness. If only there was some snow around, christmas spirit wouldn’t feel so distant. Enter the hallucination: an annoying snowman assaulting him with bad snow jokes. In the end Carl-Johan hates snow! He goes crazy and sings “Let it Snow”…

There is a video recording of the sketch, but the sound is out of synch. As soon as I’ve fixed this problem I’ll post the video on Youtube.