On the 25th of March, a Saudia Arabia led coalition of Arab countries (with Western military and intelligence support) started bombing Yemen, the beautiful ancient country of my Father and Grandmother. The stated goal of the intervention was the reinstallment of legitimate governance, by striking military targets and weakening the Houthi insurgents and forces loyal to ousted president Ali Abdullah Saleh.

The situation was indeed very bad and volatile before the war. Now, after two months of non stop destruction, fighting continues, chaos reigns, and the humanitarian situation is catastrophic. Basic commodities like electricity, petrol, water and food are scarce. Yemen is a poor third world country, the poorest in the Middle East. More than half of its 26 million people are in need of humanitarian assistance. What they get instead are bombs and rockets from above and armed delusional maniacs on the ground, destroying everything regardless if it’s schools, hospitals or civilian homes.

Living where I live, Yemen is always the forgotten country in the media. Compare with reports on Gaza for example, during Israel’s military campaigns. By the way, there are similarities: Big guy strikes small guy, blockade (nothing gets in, nothing gets out), collective punishment etc.

I had to express my frustration and grief somehow. The only way I know is through drawing, so I made these comments on the war in Yemen. As I’m aware most people aren’t involved in Yemeni politics, I added some short explanations. All I want to say basically is: Enough war! 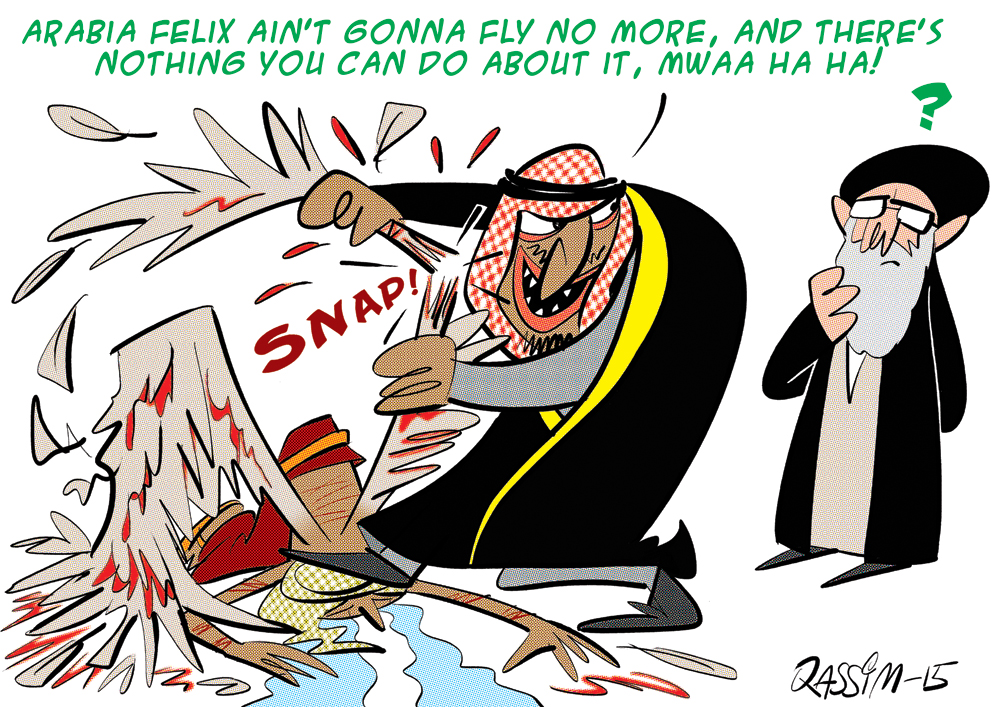 This one was done when the aerial bombardment had just started, based on media claims that Saudi Arabia and Iran are fighting a proxy war in Yemen. Seems to me Iran wasn’t aware this was the case, at least not from the outset. 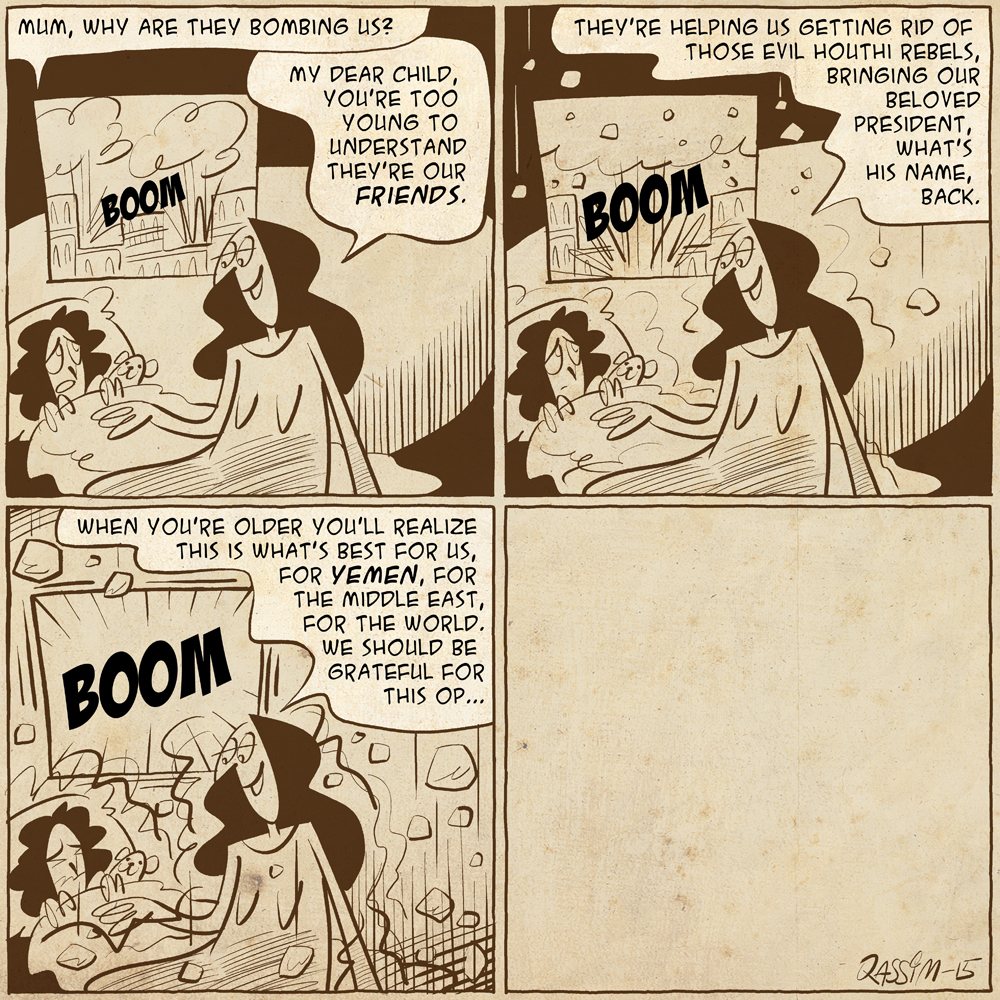 The second cartoon was based on hearing different accounts of how “Decisive Storm” was “a necessary intervention” to stop the disgusting Houthis. It was like civilians was out of the equation altogether. When all comes around, would you really support aerial bombardment if the bombs were being dropped outside YOUR window? 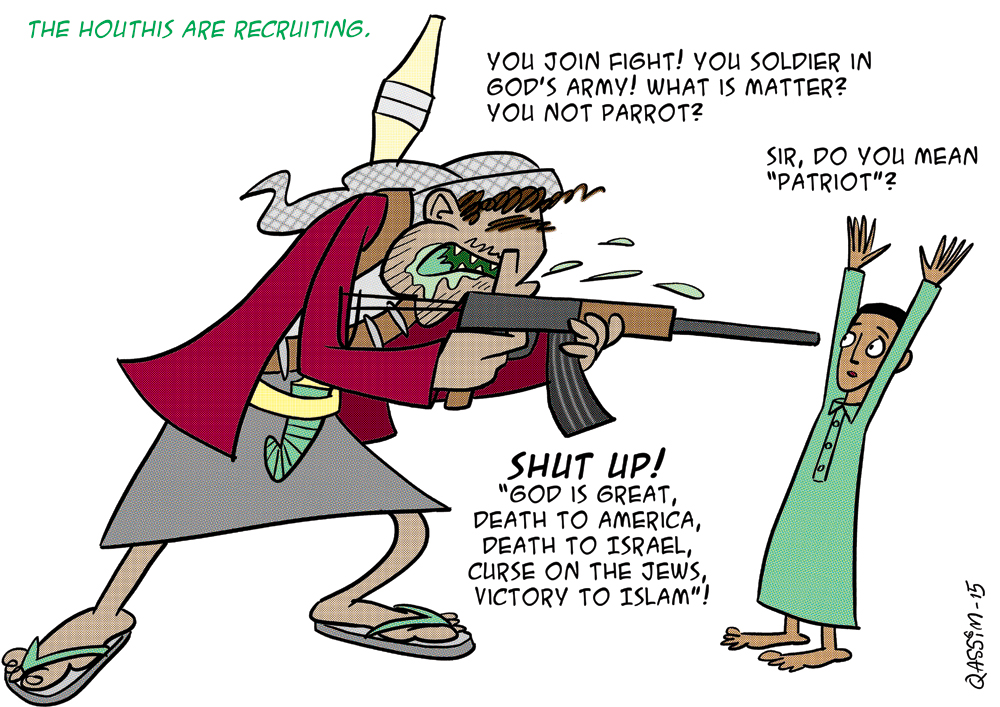 This one refers to reports of the Houthis using child soldiers, knowing they’re not the only group in Yemen to do so. 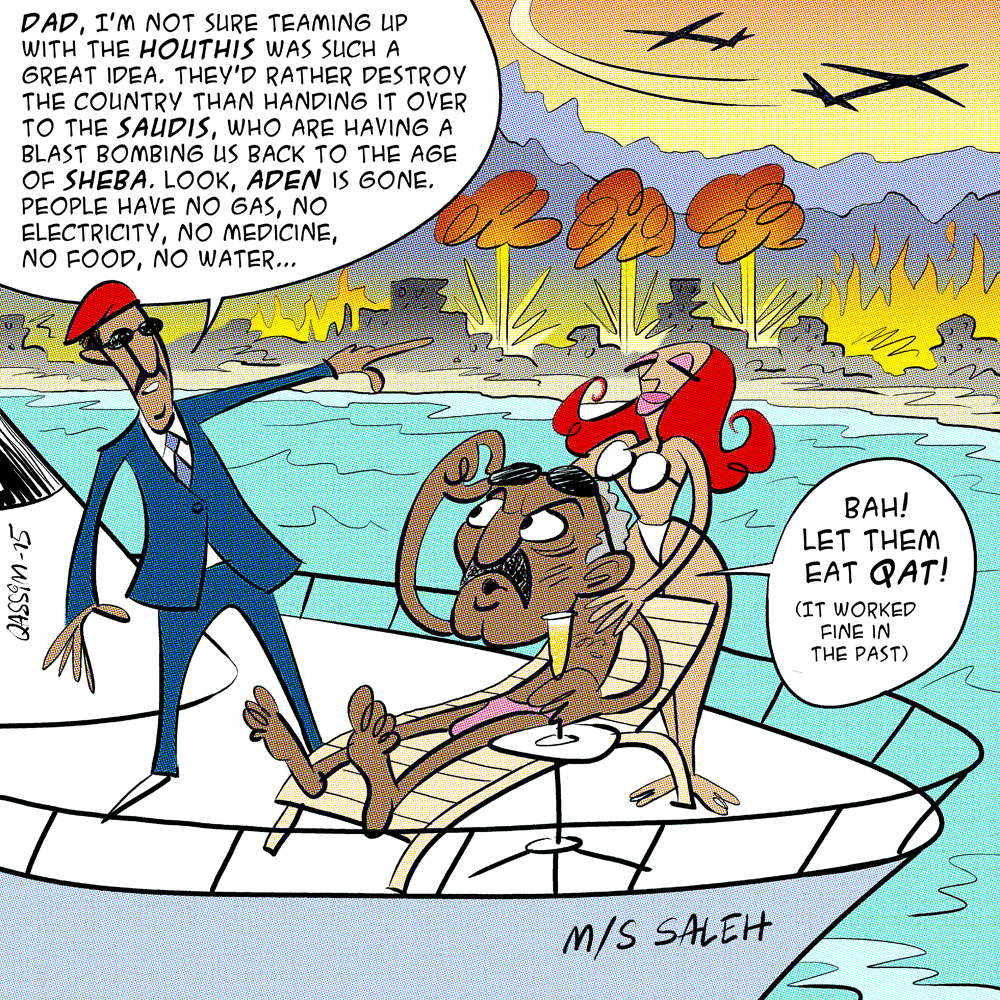 An allusion to Marie Antoinette who is said to have suggested her people could eat cake when being out of bread. To me, Yemen’s ousted president personifies the corrupt politician being out of touch with reality. 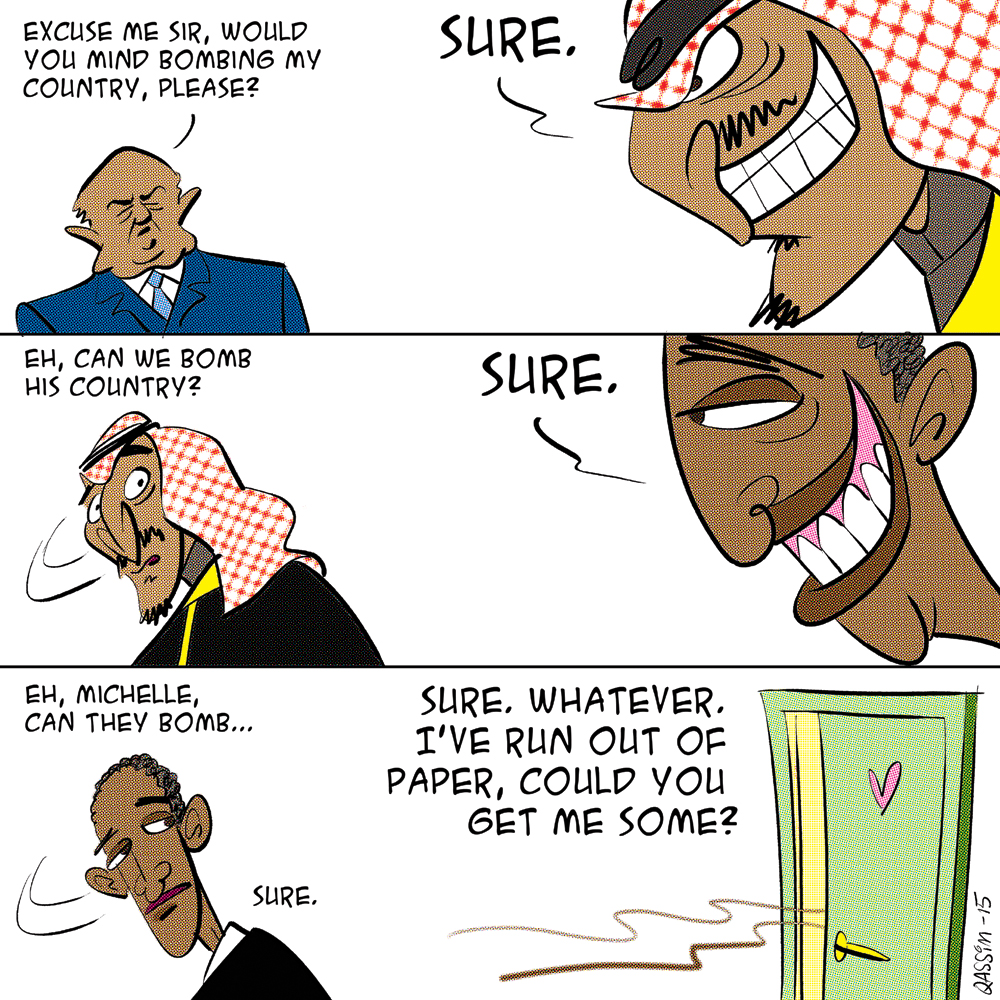 And finally, a simple joke about US involvement in this war. This war shouldn’t be dismissed as an Arab affair in which Arabs kill each other for whatever reason. As always it’s a fight for influence and power. The West is involved this time as well, yet at arms length.

I’d like to conclude by saying that there’s nothing funny about the Yemen war, but humor and cartoons have been my way of coping with worries for my family’s safety, and preventing myself from breaking down in a heap of tears over the sad sad state the country of my Father and Grandmother has reached. I’ll make more cartoons whenever I have the time.