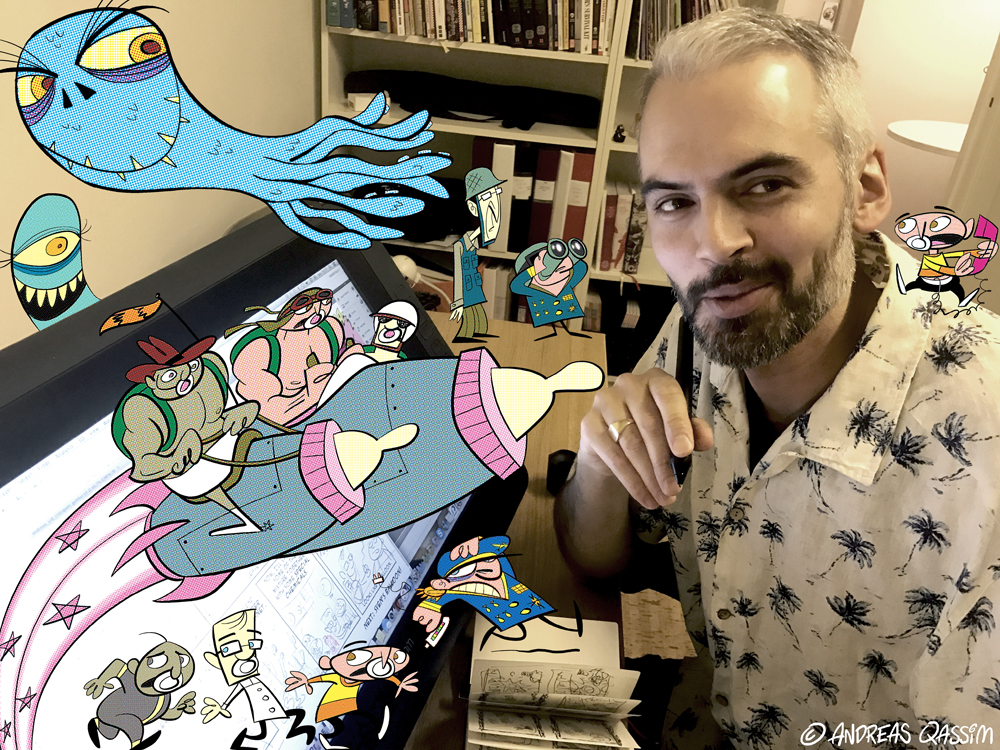 In the Kickstarter campaign, we promised to provide our backers with “behind the scenes” material. In the case of The Pacifiers that would be how we actually go about making these comics. This is the first post of that kind. There will be more. I hope these posts will make you feel involved in this crazy thing we’re creating. By supporting us, you ARE involved!

It all starts with me and Jimmy having coffee.

During this coffee session we toss around ideas, we discuss, we laugh, we say “hmm” and we chat about seemingly irrelevant stuff. We trigger each other to come up with more ideas, some of them crazy, some outright bad, some not so bad, some of them awesome. Then Jimmy takes his notes home and puts it all together (except maybe the outright bad stuff) into a coherent story. Jimmy can tell you more about the craft of scripting in another update.

I very much enjoy mutual collaborations like this. From my experience, when two creatives meet, something exciting always happen. Unexpected things start to pop up. The cross breeding of ideas and personalities. But the guys involved need to meet and talk, not staying in their secluded corner doing their thing. I’ve done too many jobs like that. Besides being boring, it’s an unnatural and stupid way of working. The end result will suffer. So for The Pacifiers, I wanted a kind of collaboration where each part is allowed to interfere with the other’s work. So that’s what we did. At each stage we looked at the material together, trying to improve it. As long as it’s done with benevolence, and as long as we share the same goal: to create something better than we would’ve been able to do on our own. But mostly because it’s fun.

This is what a Jimmy Wallin script page looks like:

I can not overstate the benefits of getting a doodled script like this rather than a text script. There’s so much in there already: layout of panels, composition, placement of balloons and boxes, even poses and expressions. I can get straight into cartooning, instead of having to peruse massive text descriptions over and over until faint images gradually start to appear. Text script writers often give you too much information. Most cartoonists have the ability to think for themselves and don’t enjoy getting every single thing dictated by the writer. And often text scripts call for too much stuff in the panels (easy to write I guess). Besides making it difficult for the cartoonist, it makes it difficult for the reader too. You want to end up with a natural flow of story, not forcing the reader to stop again and again to marvel about the zillion details that someone crammed into each panel. By reading a finished comic, it’s usually quite easy to tell if the script was written by a cartoonist or a text writer. In this case, the script writer happened to be a very gifted cartoonist (and storyteller). I love the playfulness of Jimmy’s scripts, something I try to keep all the way to the finish line.

Here’s my interpretation of Jimmy’s script:

The most important part of this phase is to get things in place (layout, composition, balloons, sound FX, poses & expressions). I don’t want to make too many final design decisions at this point, leaving the field open for sudden whims. Some pieces of the design puzzle don’t fall into place until you’ve grinded your way through the entire comic, so polishing too much at this stage would only get in your way later. I’m very much focusing on character animation here, attempting to get good expressions, movement and some energy and force in there. This style of drawing must never be stiff. If it does it will cease to be interesting. I’ve done too many jobs where you’re required to polish every single thing in the sketches, leaving nothing to interpret for the inker, which is a cracy crazy way of doing it. Besides being a waste of time, the end result will likely be less alive.

Now, most final design choices have been made, but I might still go back and change things later. I want a process where you STAY creative until the last dot of color has been added to the artwork. Of course, you wouldn’t want to make BIG changes when you’re two seconds away from sending it to a publisher (or in our case posting it on the internet). The point is to never stop being open to sudden whims that might make you hit that sweet spot you’re after, keeping a steady flow of creative juice all the way.

This is what my typical work desk set up looks like:

Laptop, Cintiq 22HD (a screen you can draw directly on), idea book/diary, coffee. Script to the left, Photoshop for sketching and inking and coloring on the Cintiq, Bridge open in the background for easy overview.

Inking to me is much more painful then sketching. For these comics I wanted to keep things loose, not sticking slavishly to model sheets and such. I chose to work in Photoshop to force myself to NOT go for perfect lines. Still I find myself trying to push it all the time, redrawing the same line over and over until I can’t do it any better (CMD+Z is a double edged word). If I wanted perfect lines, it would’ve made more sense to work in vector (in Illustrator for instance). In this case, I wanted something else, but still ended up being meticulous. For the next round of Pacifiers comics, I’ll probably try another software. Anyway, as long as it LOOKS playful and fun, and NOT stiff, then it doesn’t really matter if I had fun doing it. I’m always battling my inner perfectionist. We have a hate love relationship you could say. Or maybe hate hate, I’m not quite sure. Anyway, now that it’s done, it is what it is.

Next time I’ll write about the coloring process, and I’ll go a bit more in depth about the design choices for The Pacifiers. Being creative and doing creative work is all about making choices. Bare with me, it’ll be fun.

And if the next update doesn’t happen before Christmas (very likely):